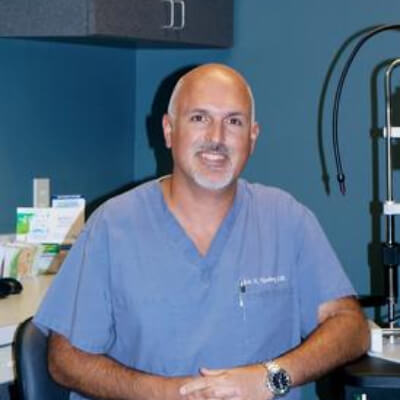 Dr. Newberry was born in Waurika, OK in 1970. He graduated in 1988 from Duncan High School in Duncan, OK. He attended Abilene Christian University in Abilene, TX for two years before earning a Bachelor of Science Degree in Biology from Oklahoma State University in 1993. He received his Doctor of Optometry degree from Northeastern State University in Tahlequah, OK in 1997. Following his doctorate, Dr. Newberry completed a one year residency in “Advanced Diagnosis and Treatment of Ocular Disease”.

Dr. Newberry began his Optometric career as a staff Optometrist for a large, multi-specialty eyecare group in Ft. Worth - Ophthalmology Associates. In 1999, he moved to Tulsa, OK, where he practiced for the next four years at a primary surgical practice that emphasized medical, surgical, and laser eyecare. While in Tulsa, he was in charge of developing one of the most successful Laser Vision Correction facilities in the nation – Triad Eye Laser Center.

He is married to Jennifer Newberry and they have three sons and a daughter.

Schedule An Appointment
Email Us
Forms of Payment